Christmas Pudding – Why is it called Pudding?

Christmas Pudding – Why is it called Pudding?

Recently I was in Connecticut (where I was born) and a friend of mine was reminiscing about how her aunt and mom would make Christmas Pudding.  The Christmas Pudding she was referring too was not a bowl of My-T-Fine Chocolate pudding but the “real” English Pudding – the kind Tiny Tim was jonesin’ for at Christmas dinner.  Then I thought, “why is it called pudding?”. 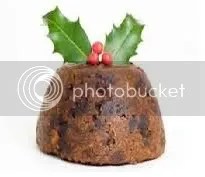 There are a few theories about where the word ‘pudding’ comes from, but my money’s on this one.

The history of the word ‘pudding’ in England begins, as do many other things, with the arrival of William the Conqueror and his band of merry, French-speaking invaders. At that time, French food was not what it is today with fancy creams and intricate pastries, but a tad more rustic.   One thing that they would eat was a sausage-type, steamed delicacy made of pig’s blood mixed with bread and other offals.  They called it “Boudin”.

Still a very much alive French word, “boudin” refers to sausages that are made with pork, pork blood and other fillers such as oat or bread.  There is ‘boudin blanc” or “white boudin” that is made with pork and milk, and ‘boudin noir” or “black boudin” made with pork, pig’s blood and fillers.  There’s even a Cajun version in New Orleans – a necessary ingredient in many dishes there. The boudins can be grilled, baked or (here’s the connection), steamed.

So moving back to England, Christmas pudding is of course steamed as well.  My friend recalls her mom steaming it in old coffee cans!  The English traditionally steam it in pudding bag or basin for several hours.  It’s an amalgam of suet, fillers such as bread, candied fruits (hence the plum reference), sugars, and brandy.  It can be  topped with a ‘hard sauce” made of sugar and butter or can also be doused with some brandy and lit afire!   Usually, it makes its final appearance at table festively adorned with a sprig of holly.

In America, pudding refers to what the English refer to as ‘custards’, and changed sometime during the early years of the Republic.  First referring to steamed custards, then to rice puddings and finally to our good ol’, My-T-Fine pudding-in-a-box!  What diner would be complete without it!

So as you celebrate this joyous, and hectic, season of Christmas 2010, you can also celebrate Franco-Anglo relations and thank Monsieur William the Conqueror for setting the wheels in motion in the naming our most beloved bowl of vanilla pudding!

Merry Christmas from The Language Chef!