There is a small Mexican restaurant near my apartment.  Most of the waiters are from Brazil.   They run around the place, chatting, yelling, and laughing.  As you’re eating your burrito or taco and sipping a cold, salty Margarita, you are rocked and lulled  by the twangy, yet soothingly dulcet sounds of Brazilian Portuguese.  You’re in New York.

Luckily all of the kitchen staff is Mexican -100 percent.  And they’re proud of it, so the Yucatan Sauce is the real deal.  I imagine that this sauce is what an ancient Mayan would have made: roasted tomatoes and tomatillos ground up by hand with poblano peppers and laced with cumin, cilantro and, of course, chilies.  They spread it over half of a roasted chicken and serve it along with tortillas and rice and beans.  It’s mouth watering. 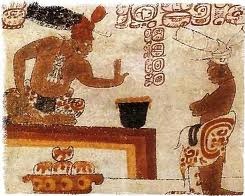 And yet, the food here really plays second fiddle to the atmosphere.   It’s close to the Fashion Institute of Technology and a few acting schools so it’s normally populated by students who are looking for a quick, cheap meal or a quite  buzz.  The waiters flirt with them in a darling way offering them shots of tequila and free glasses of wine.

I come here because I get out of my apartment where I work. And when the weather is good, I love to sit and watch the people passing by on 7th Avenue.  New York is a place where you watch people.  And I do.  And what I appreciate so much about this city is that I feel comforted knowing that there are so many people around.  I often think of what it must be like to live in a place far from society. I’d hate that.

Today I’m having a Caesar Salad with anchovies – not very Mexican but definitely delicious accompanied by a bowl full of chips of different colors.  Red, Yellow and Black.  The salsa that goes with it is really spicy and piquant.  It’s perfect.

Sipping on my glass of wine from France, my mind wanders…. 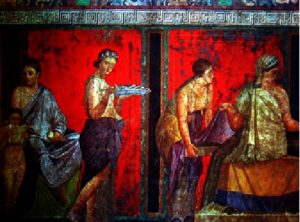 A dark,  crimson red glass of wine from France, a crisp, green salad named for a King of Rome, hearing rapid Spanish and wafting Portuguese.  This, I realize, is what an eatery in Rome — ancient Rome  –  must have felt like.  Languages from all over the Empire with everyone using a language that is not their native one but one they adopt — one they learn well enough to communicate.  It makes them feel a part of something a bit larger than themselves.  This is New York.