The food of Sicily is not only one of my favorites (maybe my favorite) but it’s also a hidden treasure for most of us in the US.  Since Sicilians have been coming to the US for over 100 years, some Sicilian dishes have become amalgamated into this vast group of foods we call “Italian American” and consequently not necessarily receiving their due.

The Flag of Sicily

This weekend, while visiting my family in Connecticut, we ventured into a new restaurant that features some of the most delicious Sicilian dishes on the planet.

Before I tell you about the food, I wanted to write a little bit about the Sicilian dialect.  At its base, Sicilian is definitely Italian in its flavor and essence and  strongly echoes its Latin roots.  Some of the most notable characteristics of Sicilian are the definite articles, meaning the word “the”.  In standard Italian, the words for “the” in the singular,  are “la” and “il” as in ‘la pizza” and “il pomodoro”, but in several southern dialects, they become “a” (pronounced ah) and “u” (pronounced ooh).  So words like “la pizza” turn into “a pizza” and “il pomodoro” into “u pumudamuru”.  In several US towns, you might even see “Apizza” adorning signs hanging over pizzerias.

Also characteristic of Sicilian is the “u” that replaces the  final “o” in standard Italian nouns, such as “fratello” (brother) and “figlio” (son).  In Sicilian, they turn into  “frateddu” and “fighiu”.  Interestingly enough, although it sounds very different to modern Italian, most linguists agree that this is probably closer to everyday Latin spoken by the ancient Romans. 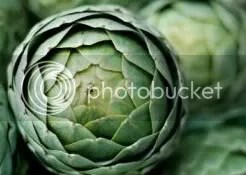 Now, back to the food.  One of the stand-outs in Sicilian cuisine is the Stuffed Artichoke.  They are steamed or boiled then the leaves are stuffed with a mixture of  bread crumbs and olive oil then baked until golden brown and finally served with fresh lemon.  As you peel off the leaves of the artichoke, you get a little of the stuffing and the tang of the lemon –  very typical and delicious.

Another amazing dish is “stemperata.”  Stemperata means “cooled off”.  In Italian and Sicilian an “S” at the beginning of the word denotes  the opposite of what follows.  So “temperate” could mean “temperatured” or  “hot”,  with “stemperata” meaning “not hot” or “cooled” off.  So this dish is nearly always served at room temperature.  There are a number of variations of stemperata, but most versions have eggplant, olives and meat  — I’ve had it with rabbit and chicken.

The next stand-out is something that I’ve eaten nearly my entire life “schiacciata”.  “Schiacciata” means flattened, and this is a Sicilian stuffed flatbread.  It can be stuffed with broccoli, spinach or my favorite potato.

To make Schiacciata is very easy.   Make a pizza dough and roll it out into a large, thin rectangle.  Next, make the filling which normally has garlic, olive oil, salt, pepper, sometimes ground sausage and a little tomato, either paste or whole pieces.  First, cook the spinach, broccoli or potatoes (slice them into fairly thin slices), then saute the garlic in some olive oil, add the sausage meat and tomatoes, then add in the spinach, broccoil or potato, season with salt and pepper.   Once the filling is prepared, cool it off and spread it on one-half of the dough.  Fold over the other half of the dough, sealing it around the edges with a little water.  Bake as you would a pizza, normally in a 400 degree oven for about a 1/2 an hour or until the top is golden brown, and there you have it!  Schiacciata alla siciliana.

There are hundreds of other Sicilian recipes to be found and enjoyed which we will feauture here at The Language Chef in the coming months. Finally, remember that ever since the Arabs brought sugar to Sicily, Sicilians have been making some of the most amazing sweets in the world.   Foremost among them is the canoli!