To mark the 100th Anniversary of the Titanic tragedy, there has been a lot in the media about the sinking, the passengers who both perished and survived and about the ship itself and why the unsinkable sunk.   As with most things, my mind turns toward food, and I wondered what they were eating or planning to eat.  Then luckily I discovered actual menus from the first, second and third class sections. All reveal much about the people aboard and are really treasure troves of culinary and linguistic tidbits from the past. 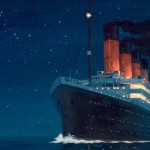 At first glance the first class lunch menu from April 14th (hours before the tragedy would start) was really simple compared to today’s standards and even had things on it that would make us giggle.  One dish that seemingly attempted to be considered classy was Chicken a la Maryland.  At first I thought it might be the invention of the Head Chef but it actually is a real dish.  It’s basically fried chicken with gravy sometimes served with corn fritters. What distinguishes it from its southern cousin is that it is not deep-fried but pan fried, and with the leftover drippings, the white gravy is made. Today we would never imagine that fried chicken would be on a menu destined for any first-class anything.  Can you imagine going into Le Cirque in New York City and seeing fried chicken on the menu?  How things have changed.

Another notable menu item was Cockie Leekie Soup.  Huh?  On the first class menu?  First of all I wasn’t sure what it was and so I found a recipe.  It’s simply chicken soup with leeks and oddly, prunes are added. YES prunes.. Again, this was on the First-class menu!   Originating in Scotland in the 16th century, the soup is made of a cockie (a cock, ie rooster, no giggles please) and leekies or leeks. At some point prunes were added to boost nutritional value.  In any case, a good chicken soup is good during difficult times, so I like to think that someone had a nice warm bowl before the fateful events began to unfold.

The evening meal’s menu was a tad more upper crusty and featured some dishes that we would easily see on a higher-end menu.  A 10 course meal was served and included oysters as a hors d’oeuvres, filet mignon, sirloin steak and potatoes Parmentier.  The sweets were as classy and one notable standout, Waldorf Pudding, not only was unusual but to this day, we are not sure what it was exactly.  Along with the 1500 plus passengers that perished, so did the recipe for this pudding.  Many speculate what it was but I found it really interesting that the recipe also was lost.

As for the second-class ‘saloon’ as they called it then, the menu was more mundane but food was clearly abundant – one thing that we still on cruise ships today.  The lunch menu for April 12th featured some very common things such as pea soup, corned beef, and roast mutton.  One of my favorite things on the planet was Tapioca served as a sweet along with Apple tart and biscuits.

And finally, it’s very much worth mentioning the third class bill of fare that featured some curiously named items.  Jacketed potatoes were served which was simply the name for what we call today a baked potato.  Cabin biscuits and cheese were also served.  Cabin biscuits simply are salted crackers, thicker than a Saltine, but a staple among the second and third-class passengers. One of the funniest things I noticed was what was going to be served in the evening on April 14th.  Gruel.  Yes Gruel!  They actually used that word.  Today to serve gruel and to call it that would be considered cruel!

What reveals itself to me as I looked through these menus served on the Titanic is the real human side to those who suffered unimaginably as the famous ship sank into the cold Atlantic.  They were real people full of hopes and dreams excited about being on such an amazing vessel.  Sadly, as we know, the dream was to be gashed but what remains is evidence that they enjoyed life right up to the end.  They danced and laughed and most importantly enjoyed eating even in their final hours.   Cheers to their memory!