In my time working in a Chinese restaurant, I was always amazed at how few tools we used to make amazing food.  The essential tools in Chinese cooking are few, but so effective. Chinese chefs waste no time as the cooking tends to be fast and furious and fiery.

Speaking of fire – it’s essential not just because of the heat but because of the intensity.  Chinese cooks love to cook over small infernos.  Cooking fast seals in flavor and ensure vegetables are crisp, meats are juicy and freshness abounds.

A wok, a Cantonese pronunciation for the ‘鍋’ guo of Mandarin, is arguably the centerpiece of the Chinese kitchen.  In traditional kitchens, the wok is huge, and placed over a large hole, under which a roaring and fast blaze fires.  It’s shape ensure that the fire engulfs the whole vessel and sizzles anything that ends up in it. 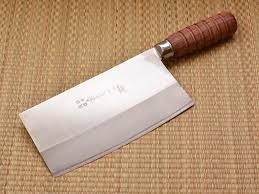 Although it seems daunting to use, the Chinese Cleaver is used for everything from slicing big heads of cabbage to skinning ginger.  Scaling and filleting fish is a snap and the best part is that its width allows for scooping up things and tossing them into a bowl or wok.

The long flat ladle and long-handled spatula are used to toss ingredients around working in harmony.  Lengthy wooden and oftentimes colorful 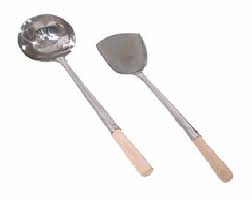 chopsticks are used to ensure that fingers aren’t burned by boiling food. Every Chinese kitchen has a few pairs.

Hot Pots are a combo of a base with glowing coals and a smaller version of the wok used to slowly simmer meats, vegetables, and noodles.  Often they are called fire pots.  This is because in Chinese the word, 火鍋 pronounced ‘huo guo’ literally means ‘fire pot’.  Mongolians are famous for theirs because of the long cold winters. 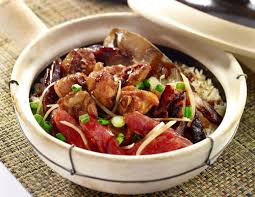 Claypots are for slow cooking saucepan dishes.  There is a symphony of recipes made in them.  Slow-cooking adds a texture and flavor hard to get in a fast cooking wok.  You’ll usually see 煲仔 or bao zai in the name of the dish.  My favorite is a chicken, winter mushroom and rice claypot.

The bamboo steamer is nicely woven together to layer and hold stacks of steaming buns, dim sum or fish, the steamer is an efficient and fast way to prepare food.

There are few things as simply and delicious as a freshly, cleaned fish on a plate topped with razor sliced  ginger and scallions then steamed in minutes.

Even though the tastes and flavors of Chinese cooking can seem complex  but the tools to make it are simple and easy.